What causes the collapse of the West? Part 2

The collapse of the West is inevitable. All empires fall, it’s but time and method that differ.

How it will collapse is a matter of debate, and I’ve discussed several options in this article here.

Why the Western world will collapse is something we can discuss with much more clarity, because the signs are already there.

I’ve done plenty of research, and I can point to 4 prominent causes:

In the previous article, I’ve discussed the first two reasons, and today we’ll take a look at the final two.

Cause #3 of the collapse of the West: Mass immigration of barbarism 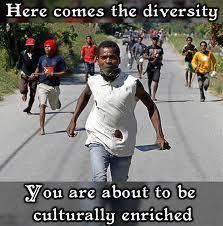 I might offend some people in the following part, so if you have a thin skin, I suggest you move on.

The mass immigration of mostly unemployable young men from vastly different and culturally incompatible (often Islamic) countries has been a complete and total disaster.

It brings about a myriad of issues.

One might say that West been importing part of its own demise, and one might not be too far off the mark.

Before we go on, let me make it perfectly clear that I have nothing at all against people moving to another country to be a productive member of said country.

This is the kind of diversity that makes life interesting. Hell, the whole premise of this site is to encourage people to move to another country!

But not to be a leech and a drain on that society, which is what is happening in the vast majority of cases in Western nations.

And a good case could be made for taking in and helping actual asylum seekers (for example: escaped IS sex-slaves).

That’s the humanitarian and humane thing to do, without question.

But do most refugees fall into this category? Overwhelmingly not.

Let’s look at some numbers first.

Over the last decade alone, this is the amount of immigrants which entered (legally or otherwise) the following Western nations:

These numbers are larger than the total population of smaller European countries.

In Europe, the employment rate of these young immigrant men is staggeringly low.

And this is not even surprising.

How can you be employed if you have no marketable skills, do not speak the language, and, most importantly, have a clear incentive to not work?

Public housing, a generous allowance, freedom to import the rest of their family.

You, as a tax-paying citizen of a Western nation, have to pick up the bill, in more ways than one.

Slowly but surely Western culture is being destroyed by large amounts of people from other cultures who often adamantly refuse to blend in.

In many countries in Europe there are enclaves where even the police do not dare to go anymore.

Are those people native to the country they are living in?

Almost overwhelmingly not, in almost every single case these are Muslim enclaves.

In the United States, this isn’t such a large problem.

There are plenty of refugees and immigrants from South-America, and they of course often bring problems with them (as do natives, and immigrants from elsewhere), but it is not on such a vast and incontrovertible scale as is happening with Islam in Europe.

Or how about the pedophile child groomers and rapists that operated in Rotherham, England, for many years?

Unimpeded, even though the police were aware of what was going on, yet were too afraid to be labeled “racist” to intervene?

Sure, I’m cherry-picking a few (out of many thousands of) incidents which occurred on European soil in recent history, all perpetuated by Islamic migrants.

And yes, the majority of Muslims abhors such actions and would never commit such acts.

Yet they believe in the same doctrine these criminals do, and by bringing this culture onto European soil, they are indirectly responsible.

The ones responsible for the mass immigration of barbarism onto European soil are the European citizens themselves, by voting for incompetent and weak politicians for years on end.

The cat’s out of the bag.

Barbarians were at the gates, and instead of being repelled, they were welcomed in, given a home and funding.

And the West is now enjoying the fruits of this generosity, by slowing losing its culture, safety and well-being.

Cause #4 of the collapse of the West: The death of civil liberties

Civil liberties are, according to the Cambridge English Dictionary:

In short, I would say it comes down to having personal freedom.

In the West, you do not have much personal freedom anymore (you never actually had it, because governments are always antithetical to freedom, but there were less restrictions in the past).

You might feel like you do, because you’ve been living under this yoke for your entire life, but as I discuss in other articles, by moving abroad your personal freedom will increase tremendously.

For now, let’s focus on freedom of speech, the bedrock of Western civilization.

A core value, a proud achievement, something we could rightfully boast about.

During the Cold War, the United States and the Soviet Union went up against each other in many arenas. The arms race, in space, global influence, and so on.

But the US had something the SU did not have (and still mostly does not have): the theoretical freedom to say what you want.

In the US you could freely insult the president and not expect to get dragged behind a shed and shot in the head.

Likewise in Europe and Canada, where a person’s right to express himself or herself is sacred and clearly emphasized in most constitutions.

In theory, journalists can write and publish what they want, private persons can speak their mind, and all of this is of paramount importance for a working democracy.

Have you felt like you could say anything you wanted lately?

If so, you haven’t been paying attention, or you’ve conformed to the current “acceptable” opinions.

Now, thought-crimes apparently exist, and people can and do go to jail for something they said, be it in earnest or as a joke.

Freedom of speech is an illusion in the current Western world.

Hate people with a different skin color and like to express your thoughts about this online?

Nobody should ever have to go to jail for what they say or think, regardless of who takes offense to it – a principle the constitution of many Western countries is based upon.

That, however, is not the case anymore.

Again the United States leads the charge in this deplorable descent into censorship, with their “political correctness”.

This expresses itself in many ways.

There are certain words which are banned from “civilized discourse”, such as nigger, cunt, or any other silly derogatory term a supposedly free people deems inappropriate – depending on who actually utters the word, of course.

Instead, they get covered with euphemisms, as if saying “the N-word” changes anything about the meaning and connotation of the word “nigger”, (C-word for cunt, R-word for retard, and so forth).

On public television, these and many other things are “bleeped out”. This is censorship and it is divisive and harmful to a free society.

Make no mistake, every single Western nation is guilty of this.

Freedom of speech is nothing but a lofty ideal, praised in theory but abhorred and banned in practice.

And then we come to the latest atrocity in this area: cancel culture.

People are not only getting vilified and publicly shamed for something they said, wrote, or implied (sometimes even decades ago in a private setting), but are often forced to resign or publicly grovel for it.

Who’s to blame for this? Again, you and I are the culprits. Well, perhaps not we personally, but the public in general, both for this ridiculous behavior and for the tendency to vote for politicians who support such behavior.

Freedom of speech must be absolute. You have to be able to say, write or think whatever you want, even if it offends other people, even if it is stupid, racist, homophobic, whatever, it does not matter.

If you aren’t free to say whatever you want, without the fear of getting censored, fired or “cancelled”, you do not have freedom of speech.

And this is now the case in every single Western nation.

At least the Russians and Chinese are open about their censorship.

Now, I have to make it clear that in many other countries I would advocate moving to, you have even less freedom of speech – about certain things.

For example, in Thailand you cannot publicly defame their king. But do you care that you cannot talk shit about the Thai king? Why would you?

However, my point is not so much that this is better in other regions, but more that in the West, freedom of speech and other civil liberties were a core value and used to be part of the bedrock of our civilization (this is not the case in other countries), and their crumbling is a sure sign of the impending collapse.

What can you do about this?

You can do nothing about the aforementioned reasons why the Western world is collapsing.

That shit has sailed. Perhaps it would have been possible to stop the collapse about 30 years ago by voting for more competent politicians, but as it stands right now, nothing can be done about it.

No matter how much you love your Western country, realize that it is going down the drain and will continue to do so until it reaches a breaking point, after which one or several scenarios can occur.

However, just because you cannot stop the West from going down, you most certainly can evade going down with it.

Set up a location-independent income, and move to another nation such as Paraguay, Dubai, the Philippines or Thailand.

None of these are perfect, as you can tell from looking at my reviews of them, but they are a hell of a lot better in most regards than Western nations at this point.

You might agree or disagree with many of the facts (blended with personal opinion, sure) I’ve mentioned in these two articles about why the West is collapsing, but if you value your long-term happiness and freedom at all, this matter at least deserves closer examination.

When will the West collapse?

The West has been in a steady state of decline for many years. The only question that remains is when it will collapse.